Is nothing something? What happens when we make time for nothing? In this episode, I will explore the idea of boredom and how mastering boredom could be one of the great benefits of mindfulness practice.

Hello and welcome to another episode of the Secular Buddhism podcast. This is episode number 103. I am your host, Noah Rasheta. Today, I’m talking about making time for nothing. Keep in mind you don’t need to use what you learned from Buddhism to be a Buddhist. You can use what you learned to be better whatever you already are. I wanted to talk a little bit today about this concept of making time for nothing. I can’t remember where I first heard that quote or not that quote, but that expression.

Perhaps it was the chapter of a book I read, or it was included somewhere in a quote, but I remember thinking how interesting to make time for nothing. Later on, I came across a book by Thich Nhat Hanh, Buddhism at Bedtime. I think that’s the book. One of the books that I read to my kids at night, at the very beginning, it has a section about nothingness. Thich Nhat Hanh asks this question, he says, “Is nothing something?” He goes on to say that yes, nothing is something, because the moment I say nothing or that I talk to you about the concept of nothingness, something pops into your mind. It’s an idea, nothingness as the absence of something.

In that sense, nothing is something. I remember exploring that idea in my head and thinking what is nothingness? Then recently coming across another quote that I shared on Facebook earlier in the week on my own personal page, but it’s a quote that was shared by Ethan Nichtern. He says, “There might be no greater skill that comes from sustained meditation practice than the increased ability to tolerate boredom. The ability to be bored and not freak out is everything. It might be the key to surviving this technological age.”

Think about that for a moment. How difficult is it for you to sit quietly in a room alone in this concept of boredom, this concept of nothingness? When you’re doing nothing, are you doing something? I would say that the answer to that is yes. I think there’s a little bit of a misunderstanding that happens with this way of thinking due to the concept that we associated with the word nothing. If someone says, “I’m thinking of nothing,” you would be tempted to think that what they’re implying as they have somehow made their mind stop thinking. They’ve been able to control their thoughts, and all the thoughts are gone, and what’s there is emptiness.

This is why I like Thich Nhat Hanh’s question where he says, “Well, is nothing something? What is the something that’s there when all those thoughts aren’t there?” Because there’s something there, right? The very nature of being human, of having a brain that works is that it’s always going. The absence of one thought may just be filling the mind with another thought. I think that seems a little bit more along the lines of what I understand mindfulness meditation to be as a practice. I was thinking about this concept with boredom and with my kids.

Some of you may feel this during the summer times. I usually feel this on weekends and then especially during the summer when we break away from our routine, and we don’t have a standard routine to follow, suddenly, things can be a little bit difficult. I don’t know if you guys noticed this, but in our family, we can get a little bit more cranky with each other after a few days of nothing, that nothingness, which is actually somethingness because, I think, there’s a lack in our ability to be bored. I find it very interesting right now at this particular phase in our lives, because we just moved.

We’re going on, what, four or five weeks now of being in a new country. Everything is different. The routine was entirely smashed to pieces, and you couple that with there’s no chance to rebuild the routine yet because school hasn’t started. Here we are living the days of nothingness with occasional somethingness. The somethingness that we’re doing, it’s big stuff. We went and swam with whale sharks last week. Last Sunday, I went and flew my Paramotor 50 miles along the coast. I’m filling some of the time in with big activities, but then the majority of the time we’re sitting around thinking, “What should we be doing?”

We’re all looking at ourselves bored, right? We don’t have the TV programs that we’re used to. We don’t have the habitual activities that we can do that we’re accustomed to from where we used to live. Everything’s new and it’s really forcing us to sit during these moments of nothingness that are actually somethingness. Those are moments where we’re sitting and thinking, “Ah, I missed this,” or the kids will say, “I missed this or that at home, or this friend or  that cousin.” Anyway, along all these lines of the nothingness and becoming comfortable with boredom, I’ve been thinking about that a lot this week thinking, “How can I help the kids to become more comfortable with this boredom and myself?”

I’ve had the thought. Well, we’ve been practicing mindfulness meditation, but I think this goes back to the misunderstanding of what the word conveys in the same way that the word nothing, I think, gives a misunderstanding of what it really is. The word meditation does the same when we say, “Hey guys, we’re going to practice our meditation tonight, or we’re going to try to practice being more mindful.” That immediately puts an idea in their head, and whatever that idea is, I don’t think it’s accurate. I think this is very common for us as practitioners.

Anyone who’s on the path or entering the path or interested in being more mindful, you have an idea of what that is and that may be the wrong idea. I wanted a couple, all of this with this notion, what if we swapped the idea of nothingness making time for nothing with the word suchness? This is a word I’ve heard before and I like it. Suchness to me gives off this idea of this is just how things are, and I’m just watching the suchness of the moment. Making time for suchness to me is a more powerful way of practicing what mindfulness actually is.

It’s the moment where I sit and I’m just observing the suchness of the moment, the suchness of whatever emotions or thoughts or feelings I’m experiencing including and perhaps especially the unpleasant ones. When we’re bored, someone had said that boredom is just the lack of observing, the lack of seeing. I agree with that because when we’re bored, we’re not looking close enough. How can you be bored in a world where you can stare at any little thing and see an infinite number of interdependent connections with that thing, whether that be in space or time. What did it take for this moment to arise?

At the end of the day, what we’re gaining is comfort with the suchness of things and perhaps if we’re lucky, a little bit more understanding about the causes and conditions that lead to that suchness, that moment of suchness. I think that it gets closer to being at the heart of taking this on as a practice where the end result is skillfulness, a much more skillful way of being with whatever is in that moment. Going back to the concept of boredom and with my kids, I think, one thing I’ve been trying to change now is instead of saying at night, “Hey, let’s sit down and practice meditation,” I’ve been saying, “Guys, let’s sit down and practice being bored.”

They’re like, “Okay.” We sit there and it’s like, “What happens when we’re bored?” Everyone’s looking around, but see now, it’s triggered this attentiveness. It’s almost like, “Well, wait a second, how do I know when I’m bored?” “Well, I don’t know. You tell me.” They’re there paying attention to how they’re feeling and to looking for the signs that would say, “Oh, now I’m bored,” but looking for the boredom has made them struggle to find the boredom, which is interesting because I think that’s the whole point is you’re training your awareness to something and then going back to Thich Nhat Hanh.. Is that nothing something? Absolutely.

In this sense, the nothingness is the something that’s actually helping them to be more skillful with practicing awareness and overcoming boredom. I wanted to share that because it is summer, and I’m sure several of you who have kids or who have broken away from the standard routine of things in the summer, sometimes it can be difficult and there’s this yearning, especially at the end of summer, to go back to whatever the ordinary routine is. It can be an invitation to use these moments of boredom as moments of triggering a way of practicing mindfulness that sometimes can be harder to do when we’re back in the routine, in the mundane routine of things, because then we’re back in reactivity mode.

We’re just doing what we do because this is the routine. I get up. I take the kids to school. I come back. I go to work or whatever that routine is. It may be harder for some people during those moments to practice being mindful or to practice those moments of witnessing suchness because we’re just in the routine, and we’re going about doing our thing. This is an invitation to use the boredom of summer to say, “Well, what does that mean? How do I know when I’m bored? What does boredom look like? What does it feel like?”

Whether you’re doing this with your kids or just with yourself, the more you poke around and explore what boredom is and how it feels, the more elusive it becomes. You may realize, “Well wait a second, that’s not boredom because now I’m interested in understanding what this is, and the very act of being interested makes it go away, right?” Boredom’s gone. It can be a fun little mindfulness practice or technique to work with. That’s the concept that I wanted to share. As always, if you want to learn more about other concepts, you can always check out my books. They’re all listed on noahrasheta.com.

If you enjoyed this podcast, feel free to share it with others, give it a review, a rating on iTunes or whatever. If you want to support the work that I’m doing with the podcast, you’re welcome to make a donation. That’s always appreciated and you can do that on secularbuddhism.com. Click on the donate button. That’s all I have for now. I look forward to recording another podcast episode soon. Hopefully given you another topic of something to think about, and that’s all I have for now. Thank you for listening. Until next time. 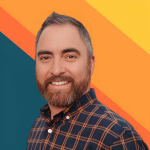 Noah Rasheta is a Buddhist teacher, lay minister, and author, as well as the host of the podcast Secular Buddhism. He teaches mindfulness and Buddhist philosophy online and in workshops all around the world. He works with others to make the world a better place as he studies, embodies, and teaches the fundamentals of Buddhist philosophy, integrating Buddhist teachings with modern science, humanism, and humor. He lives in Playa del Carmen, Mexico with his wife and three kids.